A self-organizing system is commonly defined as a system that consists of units which interact locally and act together to achieve a certain global goal. Several researchers have concurred on some of the desired features of self-organizing systems such as robustness to failure or changes; i.e., adaptation to changes in the environment, handling failures of different units (or other complications) with minimal human intervention, and in severe cases, graceful degradation instead of an abrupt break down.

A key question is whether one can engineer a self-organizing system. As part of my PhD studies, we have looked into this topic in the context of traditional cellular networks and applied concepts from nature and biological systems to self-organize relay-based access networks and achieve robustness to 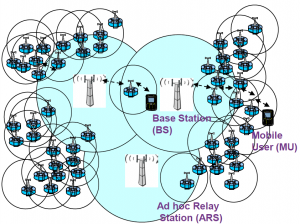 failure/environment changes. We formulated self-organization, in the context of a joint cellular and ad hoc wireless network, such that the relaying nodes in the network work cooperatively to achieve a certain goal given some constraints; namely, to achieve load-balancing and handle node failures or changes in
the environment such that the delay requirements are satisfied.

The self-organization concepts have recently found their place in the standard for the next-generation cellular networks (LTE-A).